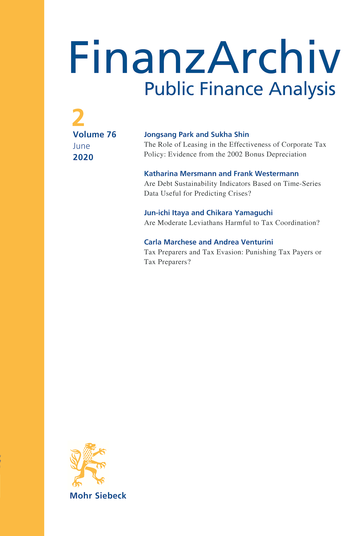 Artikel PDF
DOI: 10.1628/fa-2020-0001
We focus on amoral taxpayers who are aware of having a biased perception of the audit probability but are unable to correct such bias without the help of a tax preparer. The tax preparation market is characterized by imperfect competition. Profit maximization implies that the suggested correction of the evasion amount is partial and the report is not aligned with the one authored by an unbiased amoral taxpayer. Assisted returns are still more compliant than the self-made unbiased ones when the detection probability is overestimated, while the opposite occurs in the case of underestimation. Tax preparers thus appear to exert an ambiguous role on compliance, fostering a median stance. This provides an explanation for the ambivalent attitudes of tax authorities towards tax preparers. Sanctions on taxpayers are more effective than sanctions on tax assistants in deterring tax evasion.
Drucken
Teilen
Personen
Carla Marchese Keine aktuellen Daten verfügbar.