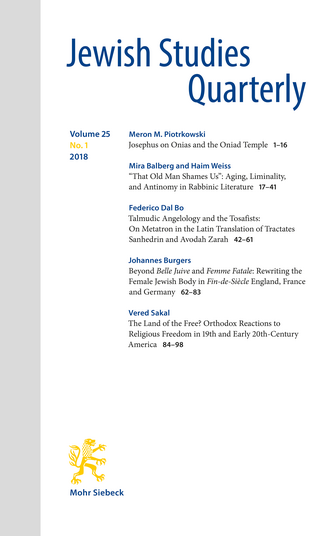 »That Old Man Shames Us«: Aging, Liminality, and Antinomy in Rabbinic Literature

Artikel PDF
DOI: 10.1628/094457018X15154209777581
This article explores the literary trope of old age in rabbinic narratives, primarily in the Babylonian Talmud. We argue that rabbinic narratives construct old persons as liminal figures, occupying spaces between center and margins and between life and death, and that their liminality serves a subversive function in stories in which they appear. We begin the article by providing a brief survey of the paradigmatic roles played by elderly people in rabbinic narratives. In the remaining parts of the article, we offer close readings of two narrative units in which an elderly person acts in an aberrant, confusing, or divisive way and thus casts a shadow of doubt and uncertainty on the normative stance that governs the narrative or its greater context.
Drucken
Teilen
Personen
Mira Balberg Keine aktuellen Daten verfügbar.