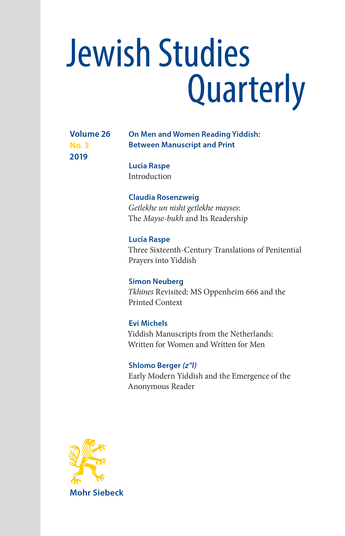 Artikel PDF
DOI: 10.1628/jsq-2019-0017
This article examines three early translations of the selihot liturgy for what they reveal about their intended use and their intended audience. One, a luxury mahzor manuscript from northern Italy, is remarkable for the sustained effort made by the scribal persona to draw readers envisioned as female nearer to synagogue liturgy. The second, a bilingual abridgment of the mahzor printed in Krakow in 1594, displays a similar interest in making the service transparent to a less than expert audience of both men and women. Neither of these two appear to have had much of an impact. By the end of the sixteenth century, it seems, the age of experimentation was over, and straightforward translations began to appear. The final section of the article looks at one such edition whose unique surviving copy has preserved a number of owners' notes, hence offers a glimpse of the volume's actual use.
Drucken
Teilen
Personen
Lucia Raspe Geboren 1965; Studium der Judaistik und der Nordamerikastudien in Tübingen, Chapel Hill (North Carolina), Berlin und Jerusalem; 2003 Promotion; wissenschaftliche Assistentin am Seminar für Judaistik an der Universität Frankfurt/Main.