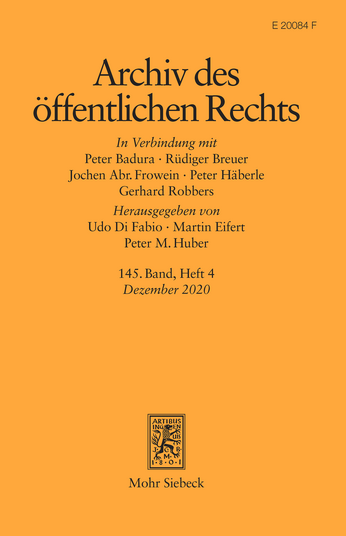 Artikel PDF
DOI: 10.1628/aoer-2020-0028
Daring less state – this is the conclusion that this article draws. It argues against the mainstream view in academia and practice that rejects the direct application of fundamental rights between private actors. This position construes horizontal effect only indirectly, i. e. by way of holding the state accountable to balance the fundamental rights interests of individual, particularly when state courts decide over private relations. The German Federal Constitutional Court as well as the vast majority of German public and private law literature contend that only such state-centered position respects personal autonomy and is in accordance with the Grundgesetz. However, this piece asserts that the opposite is the case. Not only can the direct application of fundamental rights be construed in a way that it conforms with the German constitution, closer scrutiny reveals that it is rather the doctrine of indirect effect that leads to less autonomy, personal and political. Indeed, as recent case law demonstrates, the prevalent view has to treat private actors like the state in order to take into account private power imbalances. It thus leads to etatization instead of personal freedom, whereas the direct application of fundamental rights allows for more autonomy and for better balancing the conflicting interests of both sides. In conclusion, the article calls for abandoning the state-centered view and promotes a position that warrants personal and political autonomy while responding adequately to socio-economic imbalances in private relations.
Drucken
Teilen
Personen
Andreas Kulick Geboren 1982; Studium der Rechtswissenschaft in Freiburg i.Br., Genf, Berlin (HU) und New York (NYU); 2011 Promotion; 2019 Habilitation; seit 2019 Lehrstuhlvertreter an den Universitäten Köln, Göttingen, Heidelberg und Marburg.