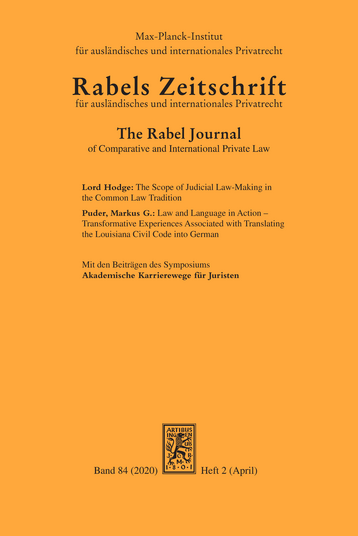 Artikel PDF
DOI: 10.1628/rabelsz-2020-0036
The landscape for an academic legal career in Japan shows some striking differences from its German counterpart. While in Germany a large number of qualified young academics struggle to secure a university posting, Japanese law faculties presently face difficulties in filling free positions. A second major difference is the way in which an academic career is achieved. In Japan, in-house, tenure-track careers are the norm whereas, at least up until now, they are a rare exception in Germany, where it is highly unusual to be appointed by the university where one has obtained his or her academic qualification. Accordingly, a change of universities in the course of an academic career is rare in Japan while in Germany the opposite is true. Japanese law faculties are entirely free to determine the qualifications necessary for an academic promotion. A second monograph, like the German »Habilitation«, is unknown in Japan. A PhD thesis, however, is increasingly common. The typical academic career starts after four years of undergraduate studies, followed by a two-year period of study at graduate level or, alternatively, two years of training at a law school. Thereafter, a three-year doctoral programme has nowadays become the norm. This is followed by employment as an assistant ( jokyō or kōshi), and in the event that the candidate's qualifications are seen as sufficient, by a promotion to the position of associate professor (jun-kyōju). The latter is a member of the faculty and employment is no longer limited in terms of duration. The final step is promotion to full professorship (kyōju) at the average age of 36 to 40.
Drucken
Teilen
Personen
Harald Baum Born 1952; study of law at the Universities of Hamburg and Freiburg; 1984 Ph.D.; 2004 Habilitation; Senior Research Fellow, Max Planck Institute for Comparative and International Private Law, Hamburg; Senior Lecturer at the University of Hamburg.