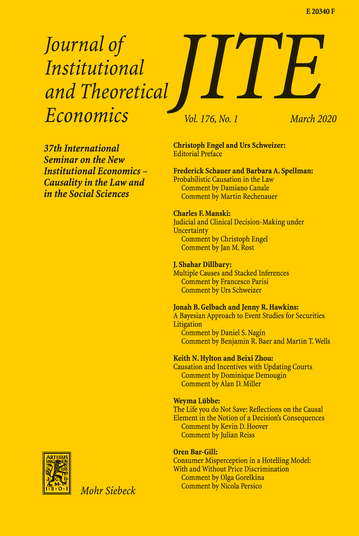 Artikel PDF
DOI: 10.1628/jite-2020-0015
This paper examines the negligence standard in the presence of intervening causal factors. The court observes the evidence and assigns a probability to the intervening factor in the course of evaluating the injurer's negligence. The court must, under the law, put a substantial weight on the facts in estimating the intervention probability. We allow the court to also put some weight on its own prior. Under such an adaptive approach to assessing negligence, incentives for care are affected by the court's inference process in addition to the usual factors. Courts can generate efficient incentives for care through the choice of prior.
Drucken
Teilen
Personen
Keith N. Hylton Keine aktuellen Daten verfügbar.