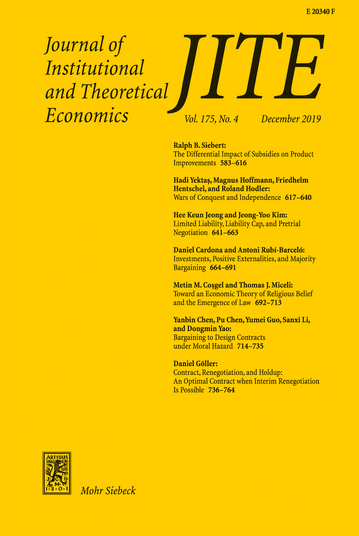 Artikel PDF
DOI: 10.1628/jite-2019-0033
I consider a bilateral trade setting in which the agents exert unverifiable investments before playing a revelation mechanism and subsequently advancing to the trading stage. Watson (2007) has demonstrated that the set of implementable outcomes (i) is largest when renegotiation can be ruled out, (ii) decreases when renegotiation takes place before the mechanism is played, and (iii) is the smallest when renegotiation takes place after playing the mechanism. I show that the agents can often attain the first best in case (ii), implying that the smaller size of the set may hold little importance from an efficiency perspective.
Drucken
Teilen
Personen
Daniel Göller Keine aktuellen Daten verfügbar.