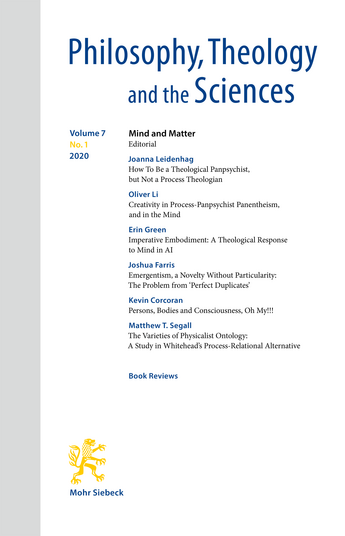 Creativity in Process-Panpsychist Panentheism, and in the Mind

Artikel PDF
DOI: 10.1628/ptsc-2020-0004
In Whiteheadian panentheism, the underlying metaphysics is often a form of process panpsychism in which creativity is understood as an 'ultimate.' In this paper I develop the thought that creativity by the 'reversed panentheistic analogy,' as suggested by Philip Clayton, in combination with the doctrine of Imago Dei, is reflected in the world in general and specifically in the human mind. In a first step, I describe Whiteheadian process panpsychism as a metaphysics in which both creativity and mentality go 'all the way down,' and argue that a process panpsychist ontology is a reasonable position for panentheists in general. Next, by applying the panentheistic analogy in reverse, together with the doctrine of Imago Dei, the inherent pancreativity, panpsychism, and with support from scientific research on the human mind, I argue that the process of the human mind, which ultimately results in consciousness and self-consciousness, should be understood both as a creative activity and a re-creation of the world. As a consequence, I suggest that attempts to create artificial consciousness may profit from research in this direction.
Drucken
Teilen
Personen
Oliver Li Keine aktuellen Daten verfügbar.