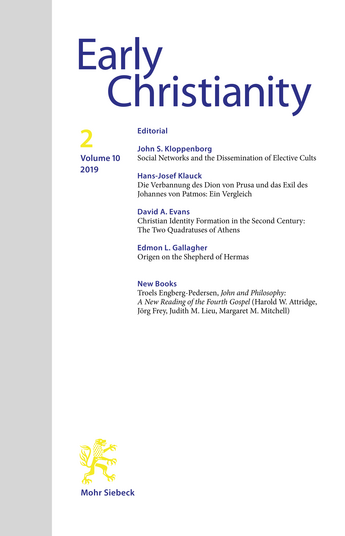 Artikel PDF
DOI: 10.1628/ec-2019-0012
Dion of Prusa (aka Dio Chrysostom) and John of Patmos (Rev 1:9) seem an unusual choice for a comparison. But both have, at least according to traditional view, one important moment in common: They were both exiled under the emperor Domitian and returned after his death. First a close reading of Rev 1:9 is given, summarizing the main points in the history of reception and modern exegesis. Then questions around Dion'sexile and »conversion« are discussed. Special consideration is given to his Or.13, and its difficult opening paragraph is analyzed in more detail. Then an alternative theory is offered: Both authors were not really exiled by Roman authorities, but went into some kind of voluntary exile. Both saw themselves confronted with execution, and therefore, to put it bluntly, they opted for a flight.
Drucken
Teilen
Personen
Hans-Josef Klauck Geboren 1946; 1977 Promotion; 1980 Habilitation; 1982–97 Professor in Würzburg; 1997–2001 Professor in München, 1999–2003 Honorarprofessor an der Universität Pretoria/Südafrika; ab 2001 Full Professor, ab 2006 Naomi-Shenstone-Donnelley Professor an der Divinity School der University of Chicago; 2016 emeritiert.