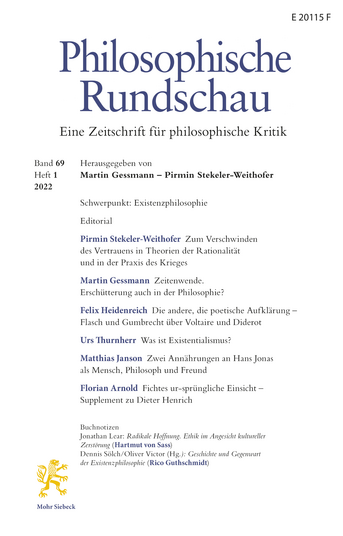 Artikel PDF
DOI: 10.1628/phr-2022-0013
Dieter Henrich has been one of the most visible figures in post-war German philosophy, at least since his eventful presidency of the International Hegel Association. Particularly in the university sphere, he has had an impact over the decades ranging from large-scale research projects to representative offices and the development of an original philosophical theory. Nevertheless, his works reveal a certain one-sidedness, which also comes to light in terms of discourse politics, especially in his recently published philosophical autobiography. We are talking about an almost complete blanking out of French philosophy of the last 60 years, a tradition that has become standard not only at philosophical institutes all over the world under the programme heading of French Theory. The reasons for this ought not be exclusively sought in the German efforts to connect with the far West, but can already be found in his early interpretation of Fichte, which has now been reprinted and considerably expanded after half a century. So, what remains to be supplemented?