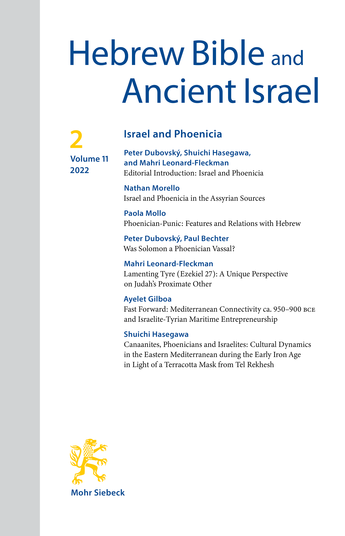 Israel and Phoenicia in the Assyrian Sources

Artikel PDF
DOI: 10.1628/hebai-2022-0022
The Assyrian written sources comprise different types of texts, including royal inscriptions, letters from the royal archives, loyalty treaties, and administrative texts. These sources can be analysed in order to investigate the history of the kingdom of Israel and of Phoenicia during the first half of the first millennium BCE, when Assyria gradually expands its hegemony »beyond the river« Euphrates, over the territories of modern Syria, southern Turkey, Lebanon, Israel and Palestine. In the present article, I will focus in particular on the relationships between Israel and Phoenicia in the Neo-Assyrian period. On the one hand, it will be analysed whether (and under which circumstances) Israel and Phoenicia took part in the numerous anti-Assyrian military coalitions formed, in ninth and eighth century BCE, with other great Levantine states, like Hamath, Arpad and Damascus. On the other hand, I will investigate the role of Israel and Phoenicia in the framework of the Assyrian grand strategy in the Levant, which was aimed at controlling and investing in a vast network of maritime and inland trade routes that crossed the entire region. It will be seen how, in the political landscape under Assyrian hegemony, some Phoenician cities maintained, in force of their well-established mercantile system, a privileged position, with effects in the long term on the relationships between Phoenicia and the kingdom of Israel.
Drucken
Teilen
Personen
Nathan Morello Keine aktuellen Daten verfügbar.