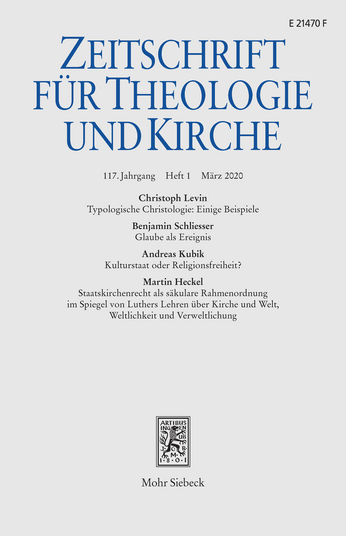 Artikel PDF
DOI: 10.1628/zthk-2020-0004
The debate on religious education (RE) or Bildung in state schools continues unabated, nurtured by the ongoing pluralization of society as much as by the shift in some European countries from confessional RE to a more neutral subject like 'knowledge of religion'. But what the debate lacks is fundamental consideration of what a liberal society could possibly want from such religious education. This article discusses the topic from the viewpoint of the philosophy of religion, taking Schleiermacher's lectures on pedagogy as a guideline. His general skepticism towards RE in state schools make his arguments especially valuable. This shows that while on the one hand there are sound 'liberal' reasons for retaining RE in schools, there are on the other seemingly liberal claims – such as »fighting fundamentalism« – which would actually have to be justified from a 'Christian cultural state' perspective and are therefore to be handled with care.
Drucken
Teilen
Personen
Andreas Kubik Geboren 1973; Studium der Ev. Theologie, Germanistik und Philosophie in Halle, Berlin und Tübingen; 2005 Promotion; seit 2015 Inhaber der Professur für Praktische Theologie und Religionspädagogik am Institut für Evangelische Theologie in Osnabrück.