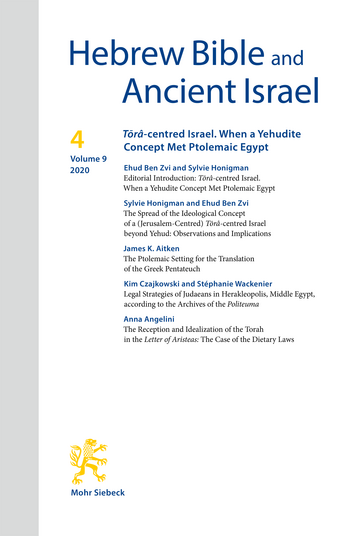 Legal Strategies of Judaeans in Herakleopolis, Middle Egypt, according to the Archives of the Politeuma

Artikel PDF
DOI: 10.1628/hebai-2020-0026
In this article, we examine the evidence from the archive of the politeuma of Judaeans at Herakleoplis (P. Polit. Iud.) to delineate Judaean legal strategies in Middle Egypt in the Ptolemaic era. We argue that the politeuma is best understood in its developed form as a social network that facilitated interaction between its members, others within the region and the Ptolemaic state. Its court provided a legal forum not only for politeuma members, but potentially for all Judaeans who lived in the Herakleopolite Nome and perhaps beyond. Judaeans could and did appeal to the politeuma – whether or not they were members – on the basis of a choice between several jurisdictions that coexisted in region. We suggest that reasons for the Judaeans to have chosen the politeuma might have been its authority over Judaeans in the surrounding villages, and that it could therefore act as an enforcer over this ethnic group in order to accelerate the effectiveness of village elders' processes.
Drucken
Teilen
Personen
Kimberley Czajkowski Keine aktuellen Daten verfügbar.