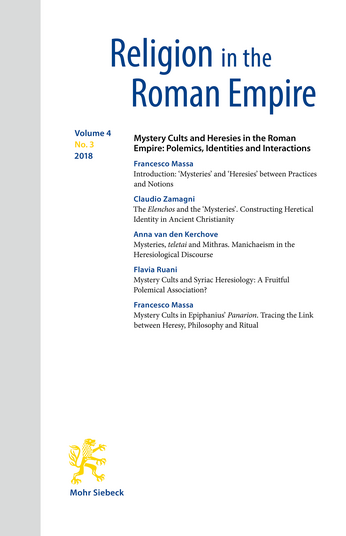 Manichaeism in the Heresiological Discourse

Artikel PDF
DOI: 10.1628/rre-2018-0023
Between the late third century and the early fourth century, Christians viewed unfavourably the spread of Manichaeism within the Roman Empire and begun to polemicise against this new religion. The paper will study how Christian authors adapt to Manichaeism one of the polemical strategies they have already used against previous 'heresies', that is the employment of mystery-lexicon and the comparison of the practices of the 'other' with mystery rituals. The paper will focus on the Acta Archelai and on the first Christian writers who based their knowledge on this text. A non-Christian will also be studied: Alexander of Lycopolis. The paper will conclude that within the polemics against Manichaeism only a few occurrences of mysteria explicitly refer to 'mystery cults', and these are related to Mithraism.
Drucken
Teilen
Personen
Anna van den Kerchove Keine aktuellen Daten verfügbar.