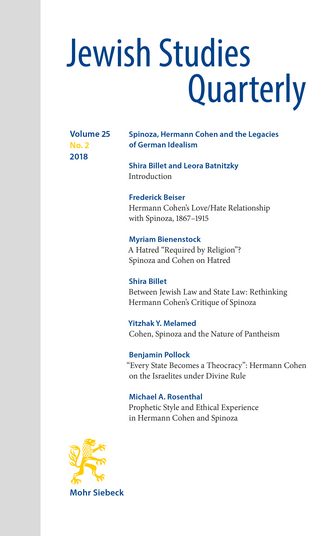 Prophetic Style and Ethical Experience in Hermann Cohen and Spinoza

Artikel PDF
DOI: 10.1628/jsq-2018-0009
In »Spinoza on State and Religion, Judaism and Christianity,« Hermann Cohen claimed that Spinoza did not understand the nature of prophecy and its ethical significance. This paper examines an earlier essay by Cohen, »The Style of the Prophets,« which shows that their views are closer than usually thought. While their metaphysical disagreement runs deep, the two offer similar accounts of the phenomenology of prophecy. Both think that the language of the prophet does not directly articulate the philosophical ground of ethics, but rather bears an analogous relationship to ethical truth. Prophecy requires reason to provide the theoretical grounding of an experience that is always expressed through an imaginative particularity. A more significant difference can be found in their accounts of the aesthetic dimension of prophecy. What Cohen understood better than Spinoza was how the formal aesthetics of prophetic experience symbolized the dynamics of the inner nature of ethical experience.
Drucken
Teilen
Personen
Michael A. Rosenthal Keine aktuellen Daten verfügbar.