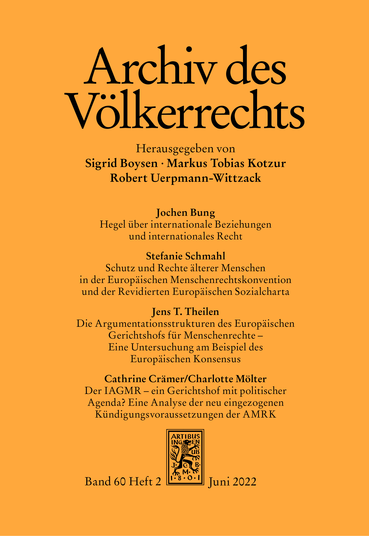 Artikel PDF
DOI: 10.1628/avr-2022-0010
The article deals with the prohibition of age discrimination and the rights of older persons under the European Convention on Human Rights (ECHR) and the Revised European Social Charter (RESC). While the prohibitions on discrimination in Article 14 ECHR and in Article 1 of the 12th Protocol to the ECHR include the prohibition of arbitrary unequal treatment of older people in the exercise of civil and political liberties, Article 23 RESC guarantees older persons various economic and social rights. The relevant provisions of both conventions and the case-law issued with regard to them are analysed in order to determine the extent to which they are suitable to effectively protect and entitle older people. A comparison of these two human rights regimes reveals that the rulings of the European Court of Human Rights (ECtHR) on the prohibition of age discrimination are convincing in terms of content and methodology. However, this result can only be transferred to a limited extent to the decisions of the European Committee of Social Rights (ECSR), which interprets Article 23 RESC broadly and even derives an inherent prohibition of discrimination from the norm. It is only with regard to the social rights of older people that the Committee's views point in a dogmatically plausible direction. In this respect, it cannot be ruled out that the ECSR's understanding of Article 23 RESC will have an increased influence on the case-law of the ECtHR on the rights of older persons in the future.
Drucken
Teilen
Personen
Stefanie Schmahl Keine aktuellen Daten verfügbar.