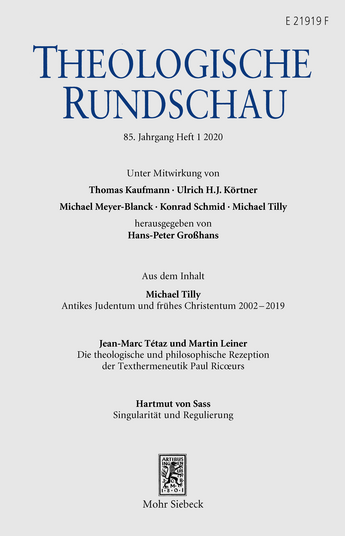 Artikel PDF
DOI: 10.1628/thr-2020-0004
The German sociologist Andreas Reckwitz is among the leading figures to »capture our time in concepts« (Hegel). His book The Society of Singularities and, more recently, the follow-up The End of Illusions draw the critical picture of a three-class-society, and its genesis. Accordingly, late capitalism, the »authenticity revolution« of the early 70s, and new ways of communication have led to the rise of a new middle class leaving a primarily material life-style and self-definition behind for the value of self-expression and a singularised form of life. This paper recapitulates Reckwitz's account and critically comments on it. First, Reckwitz does not enter the obvious and post-Marxist debate in which sense we are living in an era of new »class struggles«; second, the explanatory weight that is put on the class model is too heavy to really explain recent developments and, thus, calls for further specifications; third, Reckwitz's plea for state-based and governmental regulation remains shallow, given his own sketch of how such a politics of intervention might look like; I refer to religion as an obvious example that is a potential tool for bringing different classes together or, at least, for suspending the severe divide between divergent classes. Reckwitz, however, seems to be presupposing the wrong-headed narrative of classical secularisation while religion represents a promising candidate of being itself an important phenomena of singularisation.