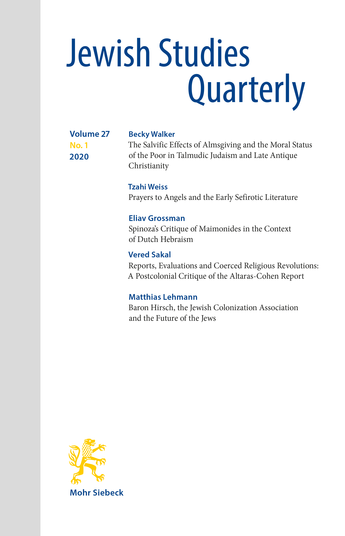 Spinoza's Critique of Maimonides in the Context of Dutch Hebraism

Artikel PDF
DOI: 10.1628/jsq-2020-0004
Spinoza's critique of Maimonides is usually read as a reflection of his relationship with his Jewish identity. Scholars have alternately argued that Spinoza inherits key aspects of his philosophy from Maimonides, thus pointing to Spinoza's sustained Jewishness even after excommunication, or that Spinoza's attack on Maimonides demonstrates the depth of his animosity towards his Jewish past. This article looks to re-orient the discussion, arguing that Spinoza's critique of Maimonides is best understood in the context of 17th-century Dutch interest in Maimonides. Dutch political Hebraists both revered Maimonides and relied heavily on his works to construct models of governance based on the ancient Hebrew polity. For Spinoza, both Dutch political Hebraists and Maimonides incorrectly ascribe eternal philosophical relevance to the Bible. Spinoza's attack on Maimonides doubly undermines Dutch political Hebraism, both by discrediting its primary source of information about ancient Israel (Maimonides) and by condemning its methodological premises, which Spinoza identifies as Maimonidean.
Drucken
Teilen
Personen
Eliav Grossman Keine aktuellen Daten verfügbar.