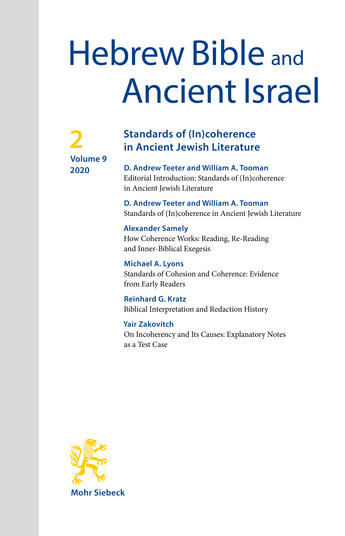 Artikel PDF
DOI: 10.1628/hebai-2020-0009
In this article, we sketch an anatomy of issues and decisions that must be navigated in any attempt to understand coherence and incoherence in ancient Jewish literature, including: the meaning of »coherence,« its relationship to »unity,« the suitability of modern standards of (in)coherence to ancient texts, and the availability of ancient standards of (in)coherence. We argue that modern perspectival representation and modern standards of literary (in)coherence are not necessarily appropriate to ancient Jewish literature, and we propose that these issues can only be properly approached after undertaking an inductive, comprehensive analysis of the ancient Jewish literature itself, in effect, learning the »ways of the text.«
Drucken
Teilen
Personen
David Andrew Teeter Born 1976; 2002 MA (University of Wisconsin-Madison); 2008 PhD (University of Notre Dame); 2010–11 Alexander von Humboldt Research Fellow and Hugo Greßmann Fellow at the Theological Faculty of the Humboldt-Universität zu Berlin; currently Associate Professor of Hebrew Bible/Old Testament at Harvard Divinity School.