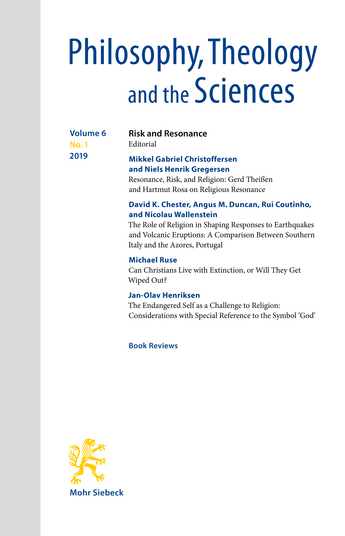 A Comparison Between Southern Italy and the Azores, Portugal

Artikel PDF
DOI: 10.1628/ptsc-2019-0004
Religions are far more varied in their approaches to natural catastrophes than is frequently recognized or acknowledged by academic writers who are trained and socialized within a 'western' post-Enlightenment tradition. In this paper, we seek to demonstrate how detailed religious responses to earthquakes and volcanic eruptions vary even between two societies, southern Italy and the Azores, which are broadly similar in terms of their southern European Catholic religiosity. In southern Italy, popular Catholicism has conflated two approaches to theodicy: the retributive and the Augustinian (i. e., free-will) defense. Divine wrath may be propitiated through piety and Christian action, which includes worship, repentance, and changed conduct and is often associated with well-choreographed ritualistic actions, some of the latter being far removed from Catholic orthodoxy. Such reactions to disaster are not confined to the past, but remain strongly embedded in present-day practice. In the Azores, a combination of a history of a better educated and more enlightened church leadership, greater emphasis on praxis following disasters, the growth of the distinctive, egalitarian, and pastorally focused Culto do Espírito Santo (i. e., Cult of the Holy Spirit), and the spread of alternative models of theodicy through educational outreach has produced a strongly contrasting religious response. We conclude that, in the case of the Azores, the religious milieu favors active collaboration between the Catholic faith community and the Civil Defense authorities in the aftermath of disasters, whereas this is not the case in southern Italy, although there are some recent signs of change.
Drucken
Teilen
Personen
David K. Chester Keine aktuellen Daten verfügbar.