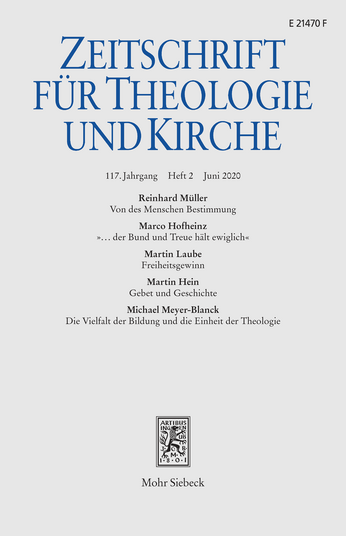 Artikel PDF
DOI: 10.1628/zthk-2020-0007
The article discusses how in the Old Testament the human ability to decide is related to the idea of determination. It begins with an overview of ancient Near Eastern concepts of determination that were included in the broadly attested art of divination, before going on to focus on the mythological motif of the heavenly tablet of destinies which was connected with the tablets that bore the text of vassal treaties (1.). Against this background, it is shown that similar concepts of a predetermination of certain human acts and events by the deity were part of the monarchic cult of Yahweh (2.). On the other hand, early wisdom presupposed that human beings are free to decide between different ways of life. This human ability became a crucial topic after the downfall of the kingdoms of Israel and Judah; the post-monarchic covenant theology revolved around Israel's necessary decision between following or abandoning Yahweh (3.). However, later texts display a tendency of ascribing to Yahweh a fundamental influence on the human will, and in some conspicuous passages it is stated that Yahweh needs to make both Israel as a whole (esp. Deut 30:6; Jer 31:33; Ez 11:19 and 36:26–27) and the pious individual (esp. Ps 51:12–13) follow his will (4.).
Drucken
Teilen
Personen
Reinhard Müller Geboren 1972; 2004 Dr. theol. (Göttingen); 2008 Habilitation (München); Professor für Altes Testament an der Georg-August-Universität Göttingen.
https://orcid.org/0000-0002-2303-7688