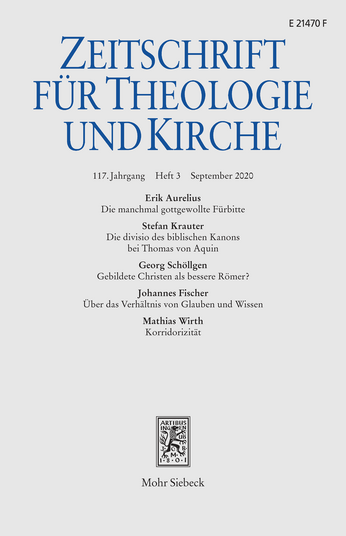 Artikel PDF
DOI: 10.1628/zthk-2020-0013
Intercession is not a frequent subject in the biblical scriptures but where it does appear, it often seems to be of decisive importance. This contribution mainly deals with two aspects of the subject. First, intercession often seems to be something God requires in order to prevent an outpouring of his wrath. God seems to be a captive of his own wrath, dependent on human intercessions for release. Second, some texts, in Jeremiah and Ezekiel for example, assert that besides intercession, God also needs sinners to repent in order to prevent his wrath. However, in other texts intercessions for sinners do not presuppose their repentance, as in most of the intercessions of Moses. Instead of mentioning that any of the guilty have repented, the texts often present the innocent intercessor as the reason for God averting his wrath. Both aspects – the intercession as required by God and the person of the intercessor as the argument of the prayer – appear together in the Song of the Suffering Servant in Isa 53, which, in turn and together with its refutation in Isa 59:16, seems to form an important backdrop for Paul's Christology in the New Testament.
Drucken
Teilen
Personen
Erik Aurelius Keine aktuellen Daten verfügbar.